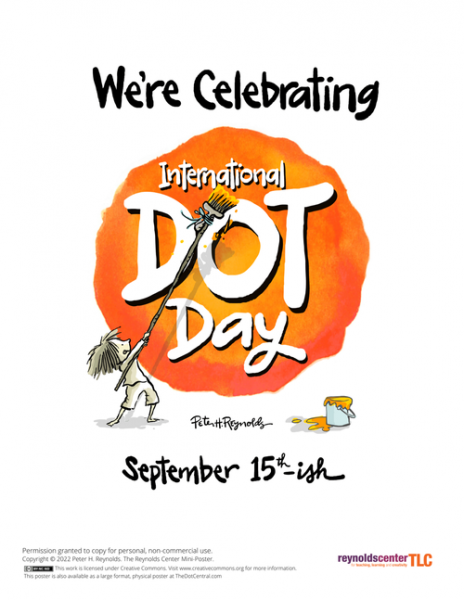 On September 15, 2003, author and illustrator of children’s books, Peter H. Reynolds released his book “The Dot.” In the story, Vashti felt like she couldn’t draw — but her art teacher wouldn’t accept that. “Just make a mark, and see where it takes you,” the teacher said to Vashti. So, she marked her parchment paper with a small dot.  The next day, Vashti was surprised to find her paper with the dot on the classroom wall. Vashti was so proud of her work that she started creating drawings with different kinds of dots.

Eventually, Vashti was able to pass the lesson about confidence that she had learned from her teacher onto someone else. A dot might be small, but it’s a powerful way to show your unique individuality and creativity. And that’s the story that inspired International Dot Day.

“The Dot” has inspired millions of children and adults. It is used by teachers as a method to encourage creativity and instill confidence in students. One teacher in Iowa, Terry Shay, introduced the book to his entire classroom on September 15, 2009. This led to the observance of International Dot Day every year on September 15. The flow of creativity and courage is celebrated by millions of teachers and students around the world. Such is the widespread influence of “The Dot” that it is currently celebrated in 192 countries by more than 19 million people!